So this is the first of my How to guides and to be perfectly honest it’ll probably be my favourite.  Dressing the Christmas tree is after all one of my favourite things to do.   I find it really therapeutic and relaxing, I do understand though that some people find it very stressful and feel they can’t seem to ‘get it right’.  With a little guidance and patience though you can achieve a lovely dressed Christmas tree without too much extra effort.

Now whether you go for the real deal or artificial the main principals of dressing the tree are the same so following the process below should have you a beautiful tree in no time at all.

Turn on the Christmas tunes and get your tree in position!
If it’s a real tree it’ll want a good drink of water so make sure your base has a well you can fill up and turn the tree around to find it’s best side.
If it’s artificial be sure to spread out those branches.  It really makes a huge difference!

The first thing you’re going to dress the tree with are the Lights – Take them out of the box, plug them in and check all the bulbs are working.  If all is good the next thing is to take the string of lights and start at the top of the tree.  Wind the lights from side to side across the tree trying to keep as evenly spaced as possible.  If you can make the room dark do so, it makes it easier to see any big gaps so you can adjust accordingly.
I like to use 3 sets of lights on our tree; 2 sets of Warm White Cone style lights and a single string of Candle lights which give the tree a nod of traditional style.

Next comes the tinsel, now I’m not a huge tinsel fan but I like to use it to add depth to the tree by pushing it in towards the main trunk filling out any gaps between the branches and giving colour further into the tree.  I think this gives a much nicer effect than swaging it all over the tree.

Beads – I use some lovely chunky bead strings on our tree (they’re about half and inch diameter beads.)  They are draped around the tree in the same way you do the lights.  I find the beads add colour and a sense of luxury without over powering the tree.

Flowers – Now again this might not be everyone’s cup of tea but I love to use flowers on the Christmas tree.  I have sprigs of artificial Blossom, Mistletoe and some miscellaneous with butterflies.  Be sure to place these throughout the tree, ensuring they stick out enough to be seen overhanging the edges of the tree.

Next come the Large Fabric Bows – I use wired ribbon for these as they hold their shape beautifully.  I’ve chosen a lovely white ribbon with a gorgeous scrolling tree detail also in white.  I use only a few placed sparsely over the tree.

This is the best bit, the baubles! When it comes to placing the baubles take your time and place them by size and colour combinations.  Larger baubles towards the bottom of the tree and smaller ones towards the top.  If you use sets of baubles try and make sure you space them out equally and if you can don’t place two of the same colour shape or size right next to each other otherwise it can look unbalanced.  Also don’t forget the tree is a 3D thing and the sides and back will need the same attention as the front.  Make sure the decorations aren’t all hung on just the ends of branches, create layers to add to that depth of decoration.  Step back away from the tree from time to time to check the balance of ornaments is right.  Another thing I always try to do is make sure my favourite baubles are in view from my favourite seat too!

The fairy! – No tree can be deemed dressed until it has a topper.  In our house we have Fairies and the one for our main tree is absolutely beautiful.  She’s always the very last decoration to adorn our tree.

Finish off with a beautiful tree skirt to complete the look!

There you have it, a beautifully dressed tree perfect for Father Christmas to leave your presents under on Christmas Eve!

Now as this is Georges 1st Christmas and 80% of our baubles are very fragile Glass ones with deep sentimental value we have chosen to baby proof the tree this year.  We have done this by way of a wooden play pen and it’s fantastic! Tree looks great and George loves having free reign still and being able to get close without touching it!

So its nearly time for the tree to come down from the attic, the lights to be detangled and the spirit of Christmas to take over the house.  I really do love this time of year and one thing in particular is all the traditions that come with it.  As a child you often don’t realise just how special some of these things, that seems a little silly at the time, actually are!  Before I had the children I used to attend Midnight Mass on Christmas Eve however with little ones in tow that isn’t so practical anymore.  We do however strive to keep up as many traditions as we can and also create some new ones!

So I’m going to share with you some of our Christmas Traditions and maybe it will inspire you to start some new ones too!

So those are just a few of our families traditions, if you’ve got an interesting family Christmas tradition please let me know!

Ok so I promised a Halloween blog post and here it is, in all its glorious ghoulishness!

Halloween at our house is as big an occasion as Christmas, it is HUGE! We love the fact that we can do something special for all the neighbourhood children and scare a few of the grown-ups along the way!

We spend at least a day dressing the outside of the house with all manner or scary props and then on Hallows eve the floodgates open and the entire neighbourhood is filled with ghosts, ghouls, zombies, werewolves, spiders and everything equally scary!

Our exterior decorations have grown over the years, we started out with just a few bits like cobwebs and do not enter tape we bought at the likes of Wilkinsons etc but our first significant purchase was “Bones”.  He is our static life sized ghoul who holds a steaming goblet which changes colour. My partner bought an outfit to match and so the pair of them stand at the front of the house. One obviously isn’t going to move but the other will and my goodness he’s made some people jump over the years! We’ve added to Bones by way of a few floating ghosts which come to life when they hear a sound so again, when Bones and my partner are stood still they are silent but when the Trick or Treaters knock on the door they come to life and are quite terrifying! We have bubbling cauldrons, skeleton dogs and cats, bats and gravestones.   Another thing we tend to do is open the door VERY loudly and quickly, again this is something most people don’t expect, and even those returning year upon year don’t seem to remember and they jump!

My eldest has been a number of different devilish things for Halloween; A werewolf, the scream character, but my favourite was a vampire with inflatable wings! Super cute!  Now he’s nearly a teenager he’s gone off the idea of going out trick or treating (apparently it’s not cool!) so no doubt this year he’ll just be joining in the sweet eating at home!

My outfit is custom made by my fair hands! I created a corpse bride outfit made from a second hand wedding dress purchased from ebay! I absolutely LOVE it and have roamed the streets with my son on many a hallows eve! Face and body painted the lot!  I adore Tim Burtons the Corpse bride and I can’t wait till George is big enough so I can wear my outfit and do it all over again!!!

Our pumpkin carving is also a huge event in our house and generally involves the entire kitchen being taken over with carving tools, buckets and drills etc. My partner favours a more mechanical technique, a Dremel, for carving intricate designs, I prefer the more traditional approach but I must admit I was tempted last year to give the Dremel a try! We’ve done some lovely designs over the years, granted none of us will win a turner prize but I think they’re great. 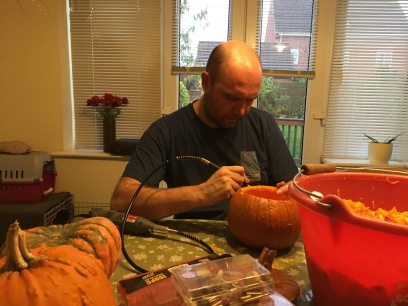 We hand pick our Pumpkins from Maxeys Farm Shop Pumpkins, their pumpkin field is phenomenal! They make complete event of it with Pumpkin Bouncy castles, a BBQ, even a Halloween Shop.  Their Pumpkins are great, very reasonably priced and the fun really is in the picking!

All our carved pumpkins stand pride of place outside the front of the house cordoned off so no one can get burned by the candles. I also like to make a mean Pumpkin soup with the leftover carvings too! 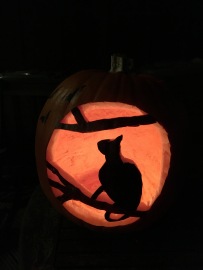 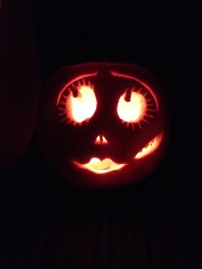 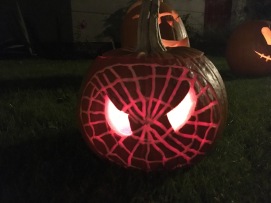 Halloween is such a great night! Living on such a large estate I love that it starts off slowly with the really little ones who are just adorable in their cute Halloween outfits (We’ve already got George a few outfits including a Pumpkin, Ghostbuster and my favourite Harry Potter even though he won’t be going out this year!) We always try to be as friendly and inviting as we can with the little ones as we don’t want to absolutely terrify them BUT as the night goes on the mood generally gets scarier and scarier until all that’s left are the teenagers and in the end they usually poop their pants too!

We’ve hosted neighbourhood parties on Halloween which included apple bobbing contests and other games but after the marauding masses subside it’s our Halloween tradition that as a family we always have Hotdogs, cake and sweeties! It’s a tradition that I love and will continue to do with my children (and in lots of time hopefully grandchildren) as long as I am able! 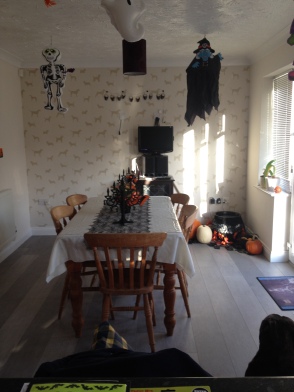 When it comes to the Trick or Treats we always opt for treats and usually end up spending a small fortune on Sweet shop favourites such as Drumstick Lollies, Refreshers etc etc.

So when it comes to Halloween get your best scary outfit on, and have a great time!

Be safe, take a grown up and our main rule is ONLY knock on the houses with Pumpkins – Those are the ones who want to join in the fun!